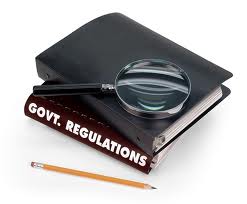 Regulation by government bodies imposes a huge cost on U.S. businesses, but it is especially onerous for small businesses.  The costs include changes needed in the business to comply, legal advice to understand rules, penalties and fines, etc.  Prices from your suppliers have built in costs for their compliance.  And seemingly daily another regulatory agency or body pops up to add more rules to your lives.

Well, Congress finally is taking steps to try to manage regulation.  Their effort has been named the Regulations from the Executive in Need of Scrutiny or REINS Act. The REINS Act would require an up-or-down vote on all new proposed rules with an economic impact of over $100 million by both the House and the Senate and the signature of the President before they can be enforced on the American public.   This act has been written to try to rein in the regulatory authority of all the agencies in the executive branch.  For some time, Congress has delegated its constitutional authority to these agencies allowing rules to be written by unelected, unsupervised, unaccountable bodies.  The REINS Act would require any “major rule,” or rule imposing an annual economic impact of $100 million or more on the economy, to be approved by Congress and the President before becoming law.  It would require a simple up or down vote by Congress before going to the President for approval or veto.  If the resolution is not passed by both the House and Senate and signed by the President within 70 legislative days, the rule would not take effect.

Small businesses should contact your senators and congressmen via their websites and urge approval of this Act.  Congress needs to rein in authority for law making and take control of the regulatory burden that is being placed on our economy.